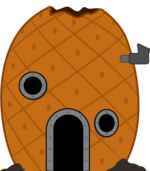 The abandoned house is a hiding spot for every tier 9 and below . The house is said that the owner abandoned the house after a Giant Squid attacked the house and his pet was kidnapped , it has stayed their ever since providing shelter for the creatures of the deeeep . The owner has left and has never been seen since, and some say he may even make a later appearance in the game....

Do you believe the myth? Even if you don't, it's still a good hiding place!